When I revealed to my teetotal mum I was heading to a ‘bottomless brunch’ she was of the assumption it was all-you-can-eat bacon sarnies and avocado on toast.

Not that the idea of that feast doesn’t sound like something I want to dive into head-first, but actually, the ‘bottomless’ in Solomon’s ‘bottomless brunch’ refers to the wares from the bar rather than the kitchen.

I neglected to correct Mother Dearest, because I feared, well,  she just wouldn’t get the attraction, but on a sunny Saturday morning, I definitely did.

The neat – by which I mean small – venue on Wilmslow Road is a favourite among Withington Village locals.

Why wouldn’t it be – M20’s spread of eateries is Didsbury-heavy, with Withy’s other main spots to dine out in being a vegetarian café bar – the painfully hip Fuel – and a Japanese restaurant with idiosyncratic opening hours – the delicious and unique Kyotoya.

So when Solomon’s unleashed the BB, I was thrilled. I have had more drinks there than in my own kitchen, so a challenge to see how many I could cram into a couple of hours was right up my street.

Enjoy one of our new dishes plus 1.5 hours of unlimited booze for only £18 🥂🥑

That’s the first thing about this brunch – it is a challenge.
Once you order your food and your first drink is delivered, you have 90 minutes of unabridged mimosa/beer/prosecco/bloody mary coming your way.

The set-up allows you to order one brunch dish from a list of the usual suspects – so pancakes with bacon and maple syrup, eggs benedict, omelettes etc – and you get a hot drink before the skirmish commences.

Sitting across from my friend and comrade in the brunch battle, I quickly realised, downing a thick and spicy bloody mary, that short drinks were the way to go. So as she dallied over her mimosa, I switched to prosecco, and found this a much more convincing way of getting my £18-worth of content from the hoopla.

Meal-wise, there isn’t really anything brunch-y that I wouldn’t tuck into with glee, so my choices were always going to be winners.

In the end, the Eggs Benedict was everything good that my tastebuds have ever enjoyed, thanks to the soft, oozing egg and slightly tart hollandaise – and, not going to lie, the addition of bacon and Bury black pudding.

Don’t judge me, dear reader. You were not there. 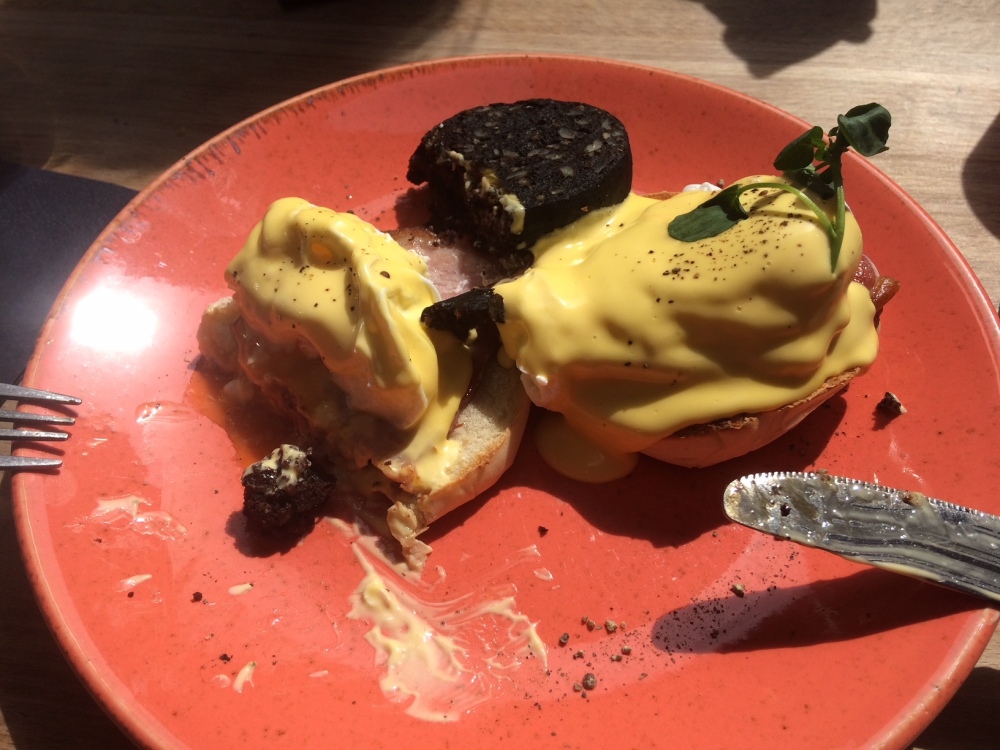 Across the table, the Friends with Benedicts elicited a satisfied sigh. Two streaky bacon slices crossed atop eggs buffeted by a bed of hash browns and topped with a creamy spinach sauce. Truly a bedtime story for those with a breakfast yen.

Super enjoying #bottomlessbrunch with @kirstiemccrum defo needed this after a run this morning! #weekendfun #brunchoclock #bloodymary

I guess the surprise for me is that writing about a meal which was dominated by the alcohol intake could actually be memorable, but the truth is that Solomon’s small kitchen is used brilliantly for simple but effective dishes like these.

The service friendly and warm, the clientele young enough to make you feel like The Fonz, I’ve spent two years getting so comfortable there that it pretty much feels like my own front room.

Bar the opportunity to down seven drinks in two hours. But that’s another bit I didn’t tell my mum…

Solomon’s Café Bar holds its Boozy Brunch every day between 11am and 2pm.
447-449 Wilmslow Road, M20 4AN. Find out more solomonscafebar.co.uk